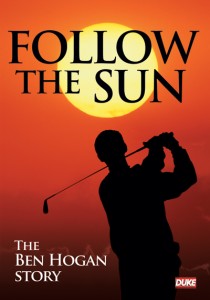 This black and white film depicts the life of a traveling tour professional, Ben Hogan, played by Glenn Ford. Even as a poor child Hogan had a love for the game of golf. He got a job as a caddy, where he learned the rules of the game and helped pull his family out of their financial rut.

Hands-down Hogan had some of the best luck on the links, winning against all odds. Other golf pros including Dr. Cary Middlecoff, Jimmy Demaret, and Slammin’ Sammy Snead appear in the film, as themselves.
Hogan’s golf status and natural skill is enough to shape this movie into an entertaining film, but when you add the physical and emotional aspects of the traumatic events in his life, you get a drama! This film gives a whole new meaning to blood, sweat and tears.
Year: 1951
Cast: Glenn Ford and Anne Baxter
(source)