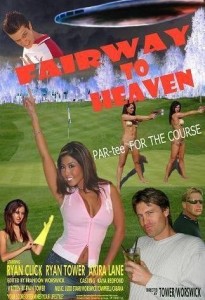 The 2007 golf comedy, Fairway to Heaven (a play-on-words on the classic Led Zeppelin song), stars Ryan Tower (who also co-directed) as Brad Tripp, a former hot-shot junior golfer who finds himself with the “dream” once more of becoming a famous, world-class linksman.

Surrounded by an (to say the least) unlikely group of assorted hangers-on and supporters, such as a lesbian golf instructor, an ex-girlfriend-turned-nemesis and an annoying caddy who’d be more at home on a surfboard, Tripp somehow manages to make the Tour. It’s only then that the two drop-dead gorgeous, bikini-clad, space-gun-wielding aliens appear.

At times hilarious, at other times merely ridiculous, Fairway to Heaven tries to be Caddyshack, but too often more closely resembles Porky’s.

“Dr. Bell’s book does a terrific job at breaking down the tools you need...

According to award-winning sportswriter Ron Green, Sr., “Augusta National is Eden with flagsticks ....