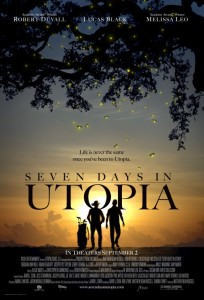 Academy Award winner Robert Duvall stars in the 2011 golfing film, Seven Days in Utopia, which is adapted from Golf’s Sacred Journey: Seven Days at the Links of Utopia by David L. Cook.

A humiliating loss in a tournament leads to an embarrassing public meltdown for pro golfer Luke Chisholm (Lucas Black), who proceeds to make things worse by driving his car through a fence in, of all places, Utopia, Texas. The fence happens to be on the property of Johnny Crawford (Duvall), a rancher and former touring golfer who senses Luke’s dilemma and takes him under his wing, offering advice and coaching.

Although having just turned 80 years of age, Robert Duvall continues to effortlessly demonstrate why he is one of Hollywood’s (still) under-appreciated actors. His portrayal of the wise, weathered mentor is alone worth the price of admission.