It´s one of golf’s great unanswered questions: Where do you leave a bunker rake? There’s no hard and fast rule, so we surveyed prominent people in the game to get their thoughts. 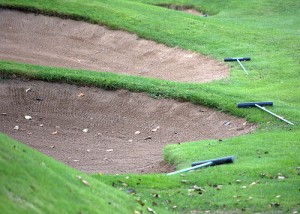 Steve Williams, caddie of Tiger Woods: “Rakes should remain out of the bunkers in a place where they’re least likely to get hit. In most cases that would be on the lip of the bunker closest to the green you’re facing.”
Jack Nicklaus: “If I needed to choose, I’d opt to have the rakes on the outside, but not in the line of play or on the green side of greenside bunkers.” 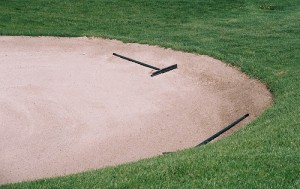 Arnold Palmer: “When a ball gets close to a rake in a bunker, you get relief to play the shot. It doesn’t affect the game. But if it hits a rake outside a bunker, it does.”
Gary Player: “I remember a tournament in Europe where a rake stopped my ball from going into a deep bunker with steep walls. If my ball hadn’t hit the rake, I would have made a 5 or 6.” (Source: Golf World Magazine)