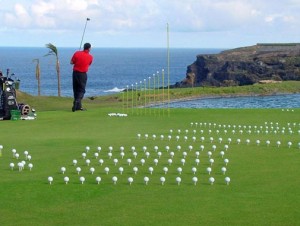 Vicente Ballesteros was born on a twelve of March in Pedreña (Santander) Spain. He was the third of four brothers, Baldomero, Manuel, Vicente and Severiano Ballesteros, always united by their ability and never ending dedication to Golf.

Vicente Ballesteros has always stood out for his creativity and ability to hit a huge number of shots apparently impossible for any other player. He also performs beautiful and visually attractive games for the audience. They are absolutely surprising and amazing such as getting the ball to smoothly roll from the head all over the shaft to the grip until he traps it in his thumb. Another of his spectacular abilities is to throw the ball into the air and with an amazing grace hit it before it lands on the ground. Then the audience feels he is in such urge to make the next shot more astonishing.

His shows evolve in an atmosphere of great anticipation due to his nearness to the public who gets involved in many of the shots making the audience sometimes the leading character of the show. The public also enjoys seeing the crazy irons with impossible designs because they are nowhere to be see and a true rareness and curiosity on each of the different performances. Vicente always surprises us with something new because he has a repertoire of more than 50 tricks. Something to be seen, enjoyed and after described and told to others. It is a perfect show for all kinds of public. (Source: www.ballesterosgolfshow.com)

Can you imagine being 20 years old and driving a Lamborghini? Unbelievable! You know...

In this very funny sports book (a cross between Nick Hornby and Bill Bryson)...