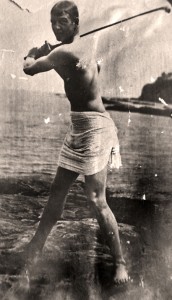 Born in Edinburgh, the third son of eminent physicist and fanatical amateur golfer Peter Guthrie Tait, Frederick was educated at the Edinburgh Academy and Sedbergh School. He entered the Royal Military Academy Sandhurst at the second attempt and is credited with introducing golf there. Tait joined the 2nd battalion, the Leinster regiment (109th foot) and then the 2nd battalion, the Black Watch.

He began to play golf at the age of five and at seven years old of age he was allowed to play at St Andrews, which became his home course for the remainder of his brief yet brilliant life.

Tait was an extremely powerful and long hitter of the ball. At The Royal and Ancient Golf Club of St Andrews on 11 January 1893, he hit the ball 250 yards, the ball then rolling on frozen ground and coming to rest 341 yards from the tee, thereby refuting his father’s calculation that 190 yards was the maximum possible flight. Tait won The Amateur Championship twice (1896 and 1898), finished third in The Open Championship twice (1896 and 1897) and was leading amateur in the same competition on six occasions.

Tait was killed in action at Koodoosberg during the Second Boer War. (Source: Wikipedia)

A small, skinny landmass on the eastern edge of the Long Island Sound, Fishers...

It is the tournament that separates champions from mortals. It is the starting point...