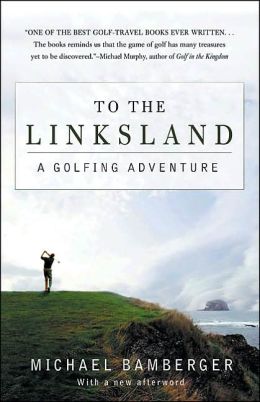 Published to universal acclaim almost a decade ago, To the Linksland is the story of Michael Bamberger’s search for golfing nirvana in Europe, from the rough-and-tumble courses of the Continent to the hallowed fairways of Scotland. In 1991 Bamberger, a lifelong golfer whose game had stagnated, quit his sportswriting job and went to Europe with his wife in search of the true soul of golf. He first caddies for transplanted New Englander Peter Teravainen, whose odd behavior and erratic play gives Bamberger insight into the infinitesimal differences between a good player and a successful professional.

After caddying in the Scottish Open, Bamberger remains behind to study the game in its homeland. While being mentored by an aged Scottish golf guru and playing on some of the world’s oldest and most storied courses, Bamberger at last comes to understand the game at a deeper, intuitive level and begins to play the best golf of his life.

Featuring a new afterword in which the author returns to the courses he played, To the Linksland is a lively travel narrative that is also an homage to the history and legacies of the game, a triumphant journey to the very heart and soul of golf.