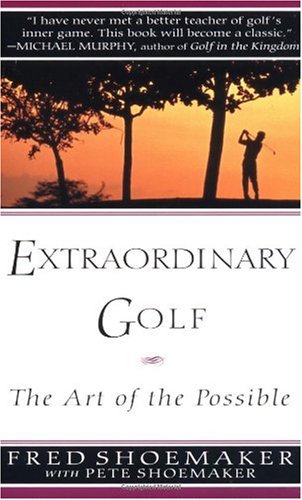 Flouting course etiquette, Shoemaker recommends throwing golf clubs. Golfers who have just dunked a ball in their local water hazard might thank him for the permission, but Shoemaker’s point–his only mechanical tip–is not to release anger but to restore the relaxation flowing from a confident swing.

Since that feeling rarely returns by tinkering with technique, Shoemaker and his coauthor, brother Pete, stress attitude, much in the manner of Michael Murphy’s classic Golf in the Kingdom. (Shoemaker, like Murphy before him, teaches inspirational golf at the Esalen Institute.)

Once a legitimate aspirant to the PGA tour, Shoemaker soured on the sport, only to realize much later that his problem was worrying how he looked, rather than playing each shot in the moment. Since getting in that zone obsesses every golfer, Shoemaker’s pep talk is sure to find an audience, especially among those who like to mix golf with New Age philosophy. (source)

About the author – Fred Shoemaker began teaching golf in the 1970s. He is the founder of Extraordinary Golf, named one of Golf Magazine ‘s 25 Top Golf Schools in America.

25 Years of the Dubai Desert Classic By David Cannon and Rodney Bogg 25...

The First Recorded – The earliest recorded hole-in-one was in 1868 at the Open...

Hailed as a classic and read everywhere golf is played, “Golf My Way” has...