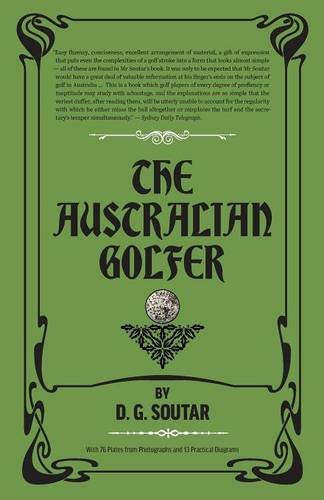 ‘Easy fluency, conciseness, excellent arrangement of material, a gift of expression that puts even the complexities of a golf stroke into a form that looks almost simple – all of these are found in Mr Soutar’s book. It was only to be expected that Mr Soutar would have a great deal of valuable information at his finger’s ends on the subject of golf in Australia …

This is a book which golf players of every degree of profiency or ineptitude may study with advantage, and the explanations are so simple that the veriest duffer, after reading them, will be utterly unable to account for the regularity with which he either misss the ball altogether or misplaces the turf and the secretary’s temper simultaneously.’ – Sydney Daily Telegraph This book has been reproduced by the Golf Society as it is considered the most important book published on the history of golf in Australia.

The Golf Society of Australia was established in 1982 and one of its objectives is to research and preserve the history of golf in Australia. The author, D.G. (Dan) Soutar was one of the first professional golfers in Sydney. He arrived from Scotland in 1903 and most of the information contained in this book was related to him by other golfers.

He admits that his knowledge of early Australian golf was limited, and some of the chapters are written by other people such as the information on Victoria’s golf that was written by R.A.A. Balfour-Melville, the first Secretary of Royal Melbourne Golf Club. Special thanks to Mr Ian Rennick, Past President of the Golf Society of Australia who was instrumental in making this book possible. Ian has advised that later research has discovered some errors in dates and locations. Please enjoy the read. G A Vincent A.M., President, Golf Society of Australia.

In this celebration of three legendary champions on the centennial of their birth in...