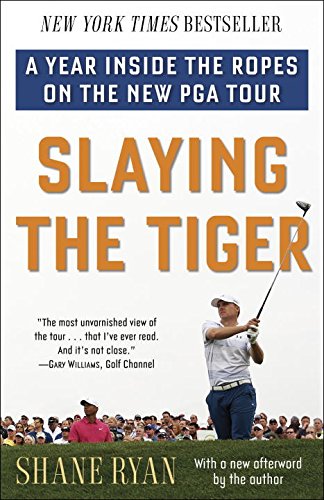 NEW YORK TIMES BESTSELLER • In Slaying the Tiger, one of today’s boldest young sportswriters spends a season inside the ropes alongside the rising stars who are transforming the game of golf.

For more than a decade, golf was dominated by one galvanizing figure: Eldrick “Tiger” Woods. But as his star has fallen, a new, ambitious generation has stepped up to claim the crown. Once the domain of veterans, golf saw a youth revolution in 2014. In Slaying the Tiger, Shane Ryan introduces us to the volatile, colorful crop of heirs apparent who are storming the barricades of this traditionally old-fashioned sport.

As the golf writer for Bill Simmons’s Grantland, Shane Ryan is the perfect herald for the sport’s new age. In Slaying the Tiger, he embeds himself for a season on the PGA Tour, where he finds the game far removed from the genteel rhythms of yesteryear. Instead, he discovers a group of mercurial talents driven to greatness by their fear of failure and their relentless perfectionism. From Augusta to Scotland, with an irreverent and energetic voice, Ryan documents every transcendent moment, every press tent tirade, and every controversy that made the 2014 Tour one of the most exciting and unpredictable in recent memory.
Here are indelibly drawn profiles of the game’s young guns: Rory McIlroy, the Northern Irish ace who stepped forward as the game’s next superstar; Patrick Reed, a brash, boastful competitor with a warrior’s mentality; Dustin Johnson, the brilliant natural talent whose private habits sabotage his potential; and Jason Day, a resilient Aussie whose hardscrabble beginnings make him the Tour’s ultimate longshot. Here also is the bumptious Bubba Watson, a devout Christian known for his unsportsmanlike outbursts on the golf course; Keegan Bradley, a flinty New Englander who plays with a colossal chip on his shoulder; twenty-one-year-old Jordan Spieth, a preternaturally mature Texan carrying the hopes of the golf establishment; and Rickie Fowler, the humble California kid striving to make his golf speak louder than his bright orange clothes.

Bound by their talent, each one hungrier than the last, these players will vie over the coming decade for the right to be called the next king of the game. Golf may be slow to change, but in 2014, the wheels were turning at a feverish pace. Slaying the Tiger offers a dynamic snapshot of a rapidly evolving sport.

Praise for Slaying the Tiger

“This book is going to be controversial. There is no question about it. . . . It is the most unvarnished view of the tour—the biggest tour in the world—that I’ve ever read. And it’s not close.”—Gary Williams, Golf Channel

“A must-read for PGA Tour fans from the casual to the most dedicated . . . This book is certain to be as important to this era as [John] Feinstein’s [A Good Walk Spoiled] was two decades ago. . . . A well-researched, in-depth look at the men who inhabit the highest levels of the game.”—Examiner.com

“Ryan does a fantastic job painting a thoughtful and accurate portrait of the new crop of heirs apparent.”—Stephanie Wei, Wei Under Par

Shane Ryan has written about golf, college basketball, and baseball for various outlets, including ESPN The Magazine, Golf Digest, Deadspin, and Grantland. He also writes about music, film, and TV for Paste magazine. He grew up in Saranac Lake, New York, went to school at Duke University, and now lives in Durham, North Carolina, with his wife, Emily.

“Improve or quit!” That’s the ultimatum Randy Stewart gave himself when his mediocre golf...

Mental Rules for Golf unlocks many of the secrets of golf’s mental side by...