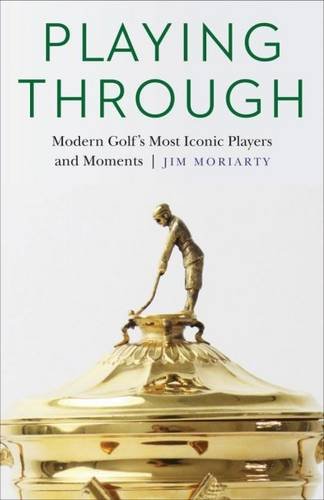 The game of golf has been witness to dramatic change since the early 1980s. Technology has relegated polished wooden drivers and wound balls covered with balata to the dustbin of history.

The world’s great courses have been stretched unfathomable lengths to counter the game’s modern champions and the distances they hit the ball. In the end, though, it still comes down to the players.

Jim Moriarty has focused his attention on the glory, sacrifice, success, and despair of these champions. In Playing Through, he captures the essence of this most recent, most transformative chapter in golf’s long history.

He writes of the last great rivalry: Jack Nicklaus versus Tom Watson; the rise of the European juggernaut with Seve Ballesteros and Nick Faldo; the Ryder Cup spectacles of 1999 and 2012 and the romance of team golf; the tragic loss of Payne Stewart and Ballesteros, both gone too soon; the emergence of the Australians, South Africans, South Americans, and Pacific Rim players in the Presidents Cup; and the man who ruled golf, Tiger Woods.

Golf may have changed in the last thirty-five years, but Moriarty’s words show that no matter how far the ball flies, it still pits the player against himself, the elements, and his opponents to remain the game we all know and love.

How much do you really know about your golf clubs? Did you know that:...

Tom Watson, a few months short of his sixtieth birthday, led the 2009 British...