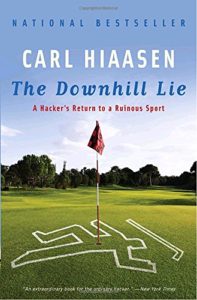 Filled with harrowing divots, deadly doglegs, and excruciating sandtraps, The Downhill Lie is a hilarious chronicle of mis-adventure that will have you rolling with laughter.

Bestselling author Carl Hiaasen wisely quit golfing in 1973. But some ambitions refuse to die, and as the years passed and the memories of slices and hooks faded, it dawned on Carl that there might be one thing in life he could do better in middle age than he could as a youth.

So gradually he ventured back to the rolling, frustrating green hills of the golf course, where he ultimately—and foolishly—agreed to compete in a country-club tournament against players who can actually hit the ball.

Carl Hiaasen was born and raised in Florida, where he still lives with his family.
A graduate of the University of Florida, at age 23 he joined The Miami Herald as a general assignment reporter and went on to work for the newspaper’s weekly magazine and prize-winning investigations team. Since 1985 Hiaasen has been writing a regular column, which at one time or another has pissed off just about everybody in South Florida, including his own bosses. Today his column appears on most Sundays in The Herald’s opinion-and-editorial section, and may be viewed online at www.herald.com.