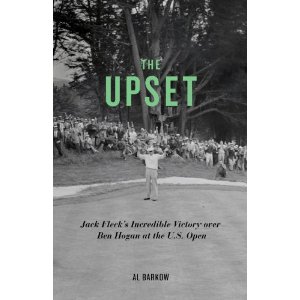 Jack Fleck had the slimmest of resumes as a professional tournament golfer. He had never even come close to winning on the PGA Tour, and was in the mere qualifier category when it came to playing in the 1955 U.S. Open at the Olympic Golf Club in San Francisco. A qualifier, in the parlance, is not even a contender; he just fills out the field. Yet Fleck got himself into a playoff with Ben Hogan, one of the greatest players in golf history, for the game’s most prestigious title.

And when Fleck defeated Hogan, it was not just surprising, it was incredible. How could a nondescript journeyman pro with a sort of caricature last name defeat a golfer who represented, in fact as much as legend, the ultimate expression of a champion golfer? Especially in a championship that Hogan was uniquely suited to win: he had already won it four times.

To be sure, Hogan was still suffering the aftereffects of a devastating highway collision seven years earlier, but in his comeback from that near-death accident he had won seven major titles and was still considered at the top of the game. His achievements had turned a taciturn public figure into a hallowed hero. Hogan remained a no-nonsense realist: golf was his living, and he went about it with stoic, unromantic perseverance.

Jack Fleck, who ran two public golf courses in Davenport, Iowa when he wasn’t playing on the tour, had met Hogan only once prior to the playoff, but ironically it was to pick up a set of golf clubs made for him by the newly formed Ben Hogan Golf Company. Fleck took those very clubs, designed by Hogan himself, into his battle for the ’55 Open. But it was not the clubs that brought him the greatest victory of his golfing life—it was his highly unusual (for the time) practice of hatha yoga.

This book presents a thrilling play-by-play, shot-by-shot recounting that brings back to life the look and feel of the entire three days of regular play and, most tellingly, the fourth-day playoff itself. Relying on first-hand sources, it reveals the players’ mental processes as they strategized their game and handled their emotions. And it finally offers a convincing explanation for Fleck’s mind-boggling victory, which was considered at the time and remains to this day one of the most unexpected outcomes in all sports history.

“Mulligan,” in its golf sense, is a relatively new word, but was in common...

Augusta National has been forced to adapt its 17th hole ahead of this year’s...

The year: 1956. Four decades have passed since Eddie Lowery came to fame as...