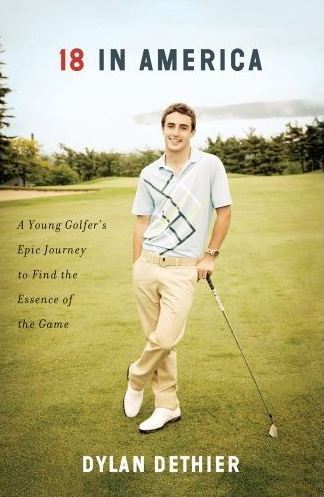 An exhilarating account of one remarkable teenager’s solo trek to play golf in each of the lower forty-eight states—a compelling coming-of-age story and a surprising look at the equalizing power of the sport in America.

At seventeen, Dylan Dethier couldn’t help but think he’d never really done anything with his life. So, two months before his freshman year was set to begin, he deferred admission to Williams College. With the reluctant blessing of his parents, Dylan set out on his idea of the Great American Road Trip: play a round of golf in each of the forty-eight contiguous states. What began as the teenage wanderlust of a sheltered New England kid soon became a journey to find America’s heart and soul, “to figure out where—and why—golf fit in,” and to explore what it means to be a young man today.

From a three-dollar nine-holer in rural West Virginia to a municipal course amid the failing factories of Flint, Michigan, and to the manicured greens of Pebble Beach, Dylan explored the variety of the nation’s golf courses, the multiplicity of its towns and cities, and, most strikingly of all, the diversity of its people.

Hoping to shatter golf’s elitist reputation, he would play with war veterans, autoworkers, and a livestock auctioneer and discovered golf’s unique capacity to serve as an equalizer. In Wyoming, he decided the state’s courses matched his own style of play: “unbridled, rough and tumble in a T-shirt and jeans sort of way.” Over one year, 35,000 miles, and countless nights alone in his dusty Subaru, Dylan would shower at truck stops, sleep with an axe beside him, lose his virginity, and meet legends like Phil Mickelson and Michael Jordan.

Dylan’s eighteenth year was one of many firsts—venturing into the world alone, exploring serious questions about his future, and fulfilling an ambitious quest. In crisp prose and with a wry, engaging voice, this precocious writer takes us beyond his own reflections to weave a poignant portrait of America and its golfers, making 18 in America the perfect gift for the golf enthusiast in your family.

Dylan Dethier (pronounced deh-CHAIR) is a native of small-town western Massachusetts. He learned to golf on a shoes-optional par-30 course near his grandparents’ house on the Maine coast. Dethier is now an English major at Williams College, where he plays on the golf team and writes for various publications.