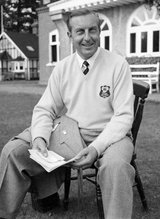 Henry Cotton was born in Cheshire. A prestigious cricketer, while attending Alleyn’s School in Dulwich, South London, he and the other non-prefects were ordered by the six prefects in the school team to transport their cricket clothing back to the school on public transport. After returning to the school, he wrote a letter to the headmaster explaining that he was not amused. The headmaster ordered that he be caned in punishment, but Cotton refused. Resultantly banned from the cricket team, Cotton and his brother took up their second sport golf at the Aquarius Golf Club in Honor Oak from 1920. In 1923 Cotton won the Hutchings Trophy, the club championship. The brothers left in 1924 to become professionals.

He started his career as a professional golfer at the age of 17, and was known for working extremely hard at his game, often practising until his hands bled. Cotton placed great emphasis upon accuracy and differed from modern golf teachers in the great emphasis he placed upon the role of the hands in the golf swing. Although emphasis was given to a correct grip, he also emphasised the need to build up the strength of the hands and forearms. The competition golfer, equipped with such assets could counter an off centre strike off the face of the club and still achieve a powerful, yet accurate shot. He also stated the need to “educate the hands” in that the competitive golfer had to achieve an awareness of the position of the hands during the golf swing itself, something modern teachers have not stressed greatly, preferring a more passive role for the hands.

He achieved fame during the Great Depression years with three victories in the British Open (1934, 1937, and 1948). He also succeeded in winning many titles on the European circuit during the 1930s. During World War II he served with the Royal Air Force, and raised money for the Red Cross by playing exhibition matches and shows. This earned him an MBE. Cotton served as captain of the Ryder Cup team in 1947 and 1953.

Following his retirement from competitive golf in the early 1950s, Cotton became a successful architect of golf courses, including designing the Le Méridien Penina on the Algarve, Portugal. Cotton wrote 10 books, and established the Golf Foundation, which helped thousands of young boys and girls get started in golf. Cotton loved the high life, including champagne, caviar and bespoke tailored clothes. He lived for a while in a suite in a 5-star hotel, and later bought an estate complete with butler and full staff, traveling everywhere in a Rolls-Royce. He was inducted into the World Golf Hall of Fame in 1980.

Cotton was knighted in the New Year’s Day Honours of 1988, named Knight Commander of the Order of St Michael and St George (KCMG). This was reported in some media as a “posthumous knighthood” because he had died by the time it was publicly announced. However, he had accepted the knighthood before his death, and it was made effective from the date of his death.

Nick Faldo was born in Welwyn Garden City, England in the 18 of July...

Gary Roger Baird is an American golf course designer from Brentwood, Tennessee, he has...