“Mulligan,” in its golf sense, is a relatively new word, but was in common use on golf courses by at least the 1940s. And there are many, many stories about the birth of the golf term “mulligan” … and it’s quite possible that none of them 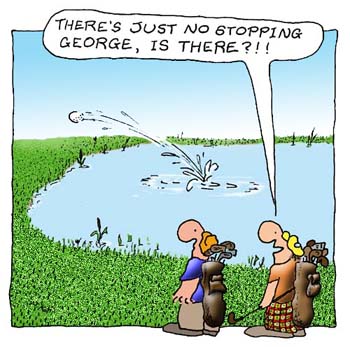 Because nobody really knows how mulligan acquired its golf meaning (a mulligan, of course, is a “do-over” – hit a bad shot, take a mulligan and try again). All we have are … those stories. And we’ll tell a few of them here.

The USGA Museum offers several possible explanations. In one, a fellow by the name of David Mulligan frequented St. Lambert Country Club in Montreal, Quebec, during the 1920s. Mulligan let it rip off the tee one day, wasn’t happy with the results, re-teed, and hit again. According to the story, he called it a “correction shot,” but his partners thought a better name was needed and dubbed it a “mulligan.”

Perhaps because Mr. Mulligan was a prominent businessman – owning multiple hotels – the term was more likely to catch on. But that’s only if you believe this version. Which, alas, does not have any hard evidence to support it. (The USGA Web Site actually provides two other alternate versions of the David Mulligan story – the origins of “mulligan” are so mysterious that the same story winds up with three different versions!)

Another story cited by the USGA is of a John “Buddy” Mulligan, known for replaying poor shots at Essex Fells Country Clubs in N.J. 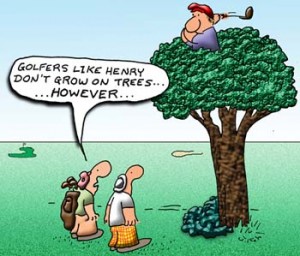 Another interesting theory is related by the Web site, StraightDope.com. Responding to a question about the origins of “mulligan” (a common Irish name and, remember, the Northeastern U.S. was heavily Irish in the early part of the 20th Century), StraightDope.com replied, “Another origin theory ties to the period when Irish-Americans were joining fancy country clubs and were derided as incompetent golfers. That would make the term basically an ethnic slur that caught on, like ‘Indian summer’ or ‘Dutch treat.’ ”

The “Dictionary of Word and Phrase Origins” offers a more prosaic explanation. It postulates the word derives from saloons that, back in the day, would place a free bottle of booze on the bar for customers to dip into. That free bottle was called, according to the book, a Mulligan. The term was adapted to the golf course to denote a “freebie” to be used by golfers. (source)