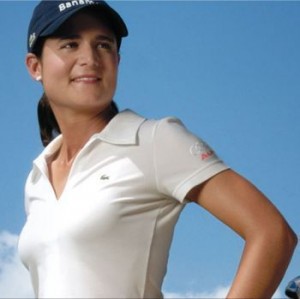 Lorena Ochoa began every news conference with the sweetest “Hello” in golf. Now, at a mere 28 years old, she’ll say goodbye to a tour that she dominated for several years. While the timing of Ochoa’s impending retirement came as a shock, the fact that she’s walking away so early in her career was expected.

Ochoa long has made it clear she would not mix family and golf. She married AeroMexico CEO Andres Conesa in December and began a new chapter in life. Most assumed Ochoa would play until 2012, when she’d qualify for the LPGA Hall of Fame after 10 seasons, but accolades have never meant more to Ochoa than family.

“Well, I think life is too short, and I always say that I want to play golf and be there 100 percent and be very competitive, and my goal is to stay in that No. 1 position as long as I play,” Ochoa said at the Kraft Nabisco Championship. “And then just different stage for my life (when starting a family) I want to be home. I want to be with my husband. I want to every day do things and be at one place, not traveling with a suitcase. I have that very clear.”

Ochoa’s thoughts won’t be known until her Friday news conference in Mexico City, but good friend Sophia Sheridan said the word in Ochoa’s camp is that she simply wasn’t enjoying the game anymore. That was obvious in Ochoa’s actions. The world No. 1’s on-course tantrums were becoming routine.

I’ve been thinking a lot lately about legacy. My church pastor (First Baptist of Orlando, where the late Payne Stewart attended) has spent the past several weeks on legacy, even quoting part of Billy Payne’s speech on Masters Sunday. While the men’s world No. 1 tries to find ways to connect with fans beyond his mind-blowing stats and swing, Ochoa never needed that lesson.

“I hope (Tiger) can come to understand that life’s greatest rewards are reserved for those who bring joy to the lives of other people,” Payne said.

But while no one will ever question the joy Ochoa brought to others in and around the game, the happiness she received in return seemed to have taken a turn in the past year.

People have been asking, “What’s wrong with Lorena?” for quite some time. At last year’s event in Phoenix, an Ochoa tantrum was caught on television. The next week in Rancho Mirage, a volunteer who had watched Ochoa for years walked up in shock after seeing Ochoa throw her ball down several times in disgust on her way to the tee. This year at the Kraft, she spiked her ball so hard on a green that she had to repair her own divot.

Ochoa’s frustrations were mounting, and one got the feeling her heart was somewhere else. Perhaps there wasn’t enough heart to go around.

That kind of competitive fire blazed within Ochoa for so many years, many will wonder how someone so competitive can just walk away, especially having won only two majors among her 27 career victories.

Well, Annika Sorenstam walked away at the end of 2008 and hasn’t thought twice about her decision. She’s as consumed by her family and business ventures as she used to be with collecting trophies. Ochoa, though 11 years younger, will be the same.

After all, golf never was the center of Ochoa’s life. God and family always have been her core. She’ll pour herself into the lives of Conesa’s three children and start planning for more. She’ll keep bringing the game to the masses in Mexico and expand her academies around the world. She’ll continue to educate the poor.

In Conesa, Ochoa has a well-respected businessman and provider who carries a lot of clout in Mexico. They maintain a Hollywood power-couple status in Mexico City, where security always is tight. That kind of fish-bowl existence can be exhausting.

Ochoa’s entire golf career was centered on becoming world No. 1. The rate she was going lately, however, it was only a matter of time (maybe weeks) before that position was taken away. If Ochoa can’t find the drive to stay at No. 1, she’s not the type to stick around.

There’s too much pressure back home in Mexico. Too many questions, too many expectations. A club-throwing, ball-spiking, thigh-slapping flurry of agitation is not the legacy Ochoa aimed to leave. Like many women, she decided she couldn’t do it all. No shame in that.

Beyond Ochoa’s millions of fans, plenty of whom should be in attendance when she tees it up next week in Morelia, Ochoa’s benevolence toward her peers, family and country will define her legacy. Ochoa’s eight years on the LPGA Tour provided a platform she undoubtedly will use for good as long as she lives.

We take a look at the amazing career of Phil Mickelson, from his first...

PGA TOUR winner George McNeill may not be long off the tee but what...