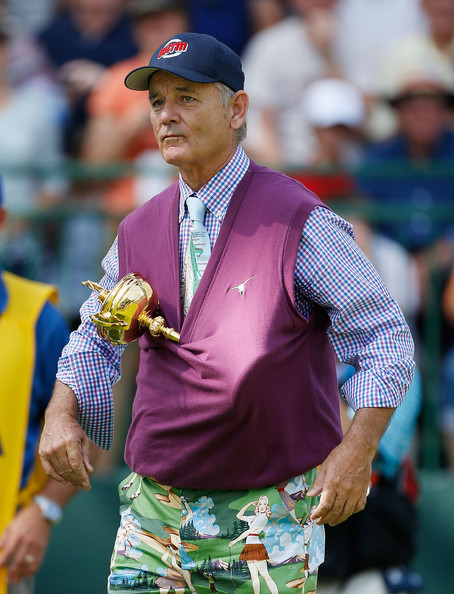 There are some great lines from movies. Lines that stick in your head. Lines that you hear and you can immediately identify the film from which they came.

We love the movies. We also love golf. So we decided it might be fun to put the two together.

We have taken some classic one-liners and put them in the mouths of some players who just might have uttered the self same words. We have also given reminders of which movies they came from and who originally said them.

John Daly: “Of all the gin joints in all the towns in all the world, she walks into mine.”
(Humphrey Bogart, Casablanca)

Phil Mickelson upon seeing his coach’s newly-designed golf course: “Do you think you used enough dynamite there, Butch?” (Robert Redford, Butch Cassidy and the Sundance Kid)

Jack Nicklaus, upon realizing that Tiger Woods might beat his record of 18 major titles: “I’m gonna make him an offer he can’t refuse.” (Marlon Brando, The Godfather)

John Daly: “You don’t understand! I coulda had class. I coulda been a contender. I could’ve been somebody, instead of a bum, which is what I am.” (Marlon Brando, On The Waterfront)

Victor Dubuisson realises he has hit the big time: “Toto, I’ve got a feeling we’re not in Kansas anymore.” (Judy Garland, The Wizard of Oz)

Any golfer on the PGA Tour aged 25 or over, talking to Jordan Spieth: “Here’s looking at you kid.” (Humphrey Bogart, Casablanca)

Voice heard by Pete Dye as he designed yet another difficult golf course: “If you build it he will come.” (Voice heard by Kevin Costner in Field of Dreams)

Rory Sabbatini to another playing partner: “You talkin’ to me?” (Robert DeNiro, Taxi Driver)

“May the Force be with you.” The voice Dustin Johnson hears in his head every time he picks up a driver. (Harrison Ford, Star Wars)

“I love the smell of napalm in the morning.” JB Holmes after smoking another 360-yard drive. (Robert Duval, Apocalypse Now)

“I think this is the beginning of a beautiful friendship.” Phil Mickelson to Bones Mackay. (Humphrey Bogart, Casablanca)

“I’m as mad as hell, and I’m not going to take this anymore!” Pat Perez misses a birdie putt. (Peter Finch, Network)

“A census taker once tried to test me. I ate his liver with some fava beans and a nice Chianti.” You just wouldn’t want to be playing with Rory Sabbatini, would you? (Anthony Hopkins, The Silence of the Lambs)

“I am big! It’s the pictures that got small.” Kevin Stadler. (Gloria Swanson, Sunset Boulevard)

“I’ll have what she’s having.” Any member of the LPGA Tour talking about the astonishing Lydia Ko. (Estelle Reiner, When Harry Met Sally)

“Badges? We ain’t got no badges! We don’t need no badges! I don’t have to show you any stinking badges!” A steward makes the mistake of asking Colin Montgomerie to show him his ID badge. (Alfonso Bedoya, Treasure of the Sierra Madre)

“I see dead people.” Rory Sabbatini’s response when asked how he would stamp out slow play.
(Haley Joel Osment, The Sixth Sense)

Tom Watson, a few months short of his sixtieth birthday, led the 2009 British...

The 2000 golf comedy, Mulligan, tells the story of four life-long friends who make...