The 72nd US Open was the first one to played at Pebble Beach in 1972. Jack Nicklaus would prevail even after shooting a two over par 74 in the final round to finish two over par for the championship. Nicklaus finished three shots clear of Bruce Crampton with Arnold Palmer a further shot back in third.

Bruce Crampton had come second to Nicklaus in the 1972 Masters and would finish second to him in two further majors, never winning one himself.

One would think Nicklaus struggled to victory shooting a closing 74 but the scoring average for the field in that final round was 78.8. Nicklaus outscored all his main competition with no player in the final top ten shooting lower.

Arnold Palmer got closest to the Golden Bear in this first US Open at Pebble Beach. A key moment came when Nicklaus, who was two ahead of Palmer at the time had an eight foot putt at the par three 12th for bogie. Palmer up ahead on the 14th hole had a ten-footer for birdie. Palmer missed his putt and Nicklaus holed to stay one ahead. Bogies at the 15th and 16th took Palmer out of contention and he would eventually finish with a 76, four back from Nicklaus.

Nicklaus standing on the famous par three 17th, and three shots clear, produced one of the most iconic shots in US Open history. A one iron into the wind struck the pin and stopped inches from the hole.

Nicklaus took a four shot lead up the final hole and had the luxury of allowing himself to three putt and still win by three shots.

– Pebble Beach was Jack’s eleventh professional major win and his third US Open.

– The top ten in the 1972 US Open would ultimately win 34 major championships between them.

– Tom Watson playing in his first US Open finished in a tie for 29th but would go on to win at Pebble Beach in 1982.

Check out the best shots from all 18 holes in the history of THE... 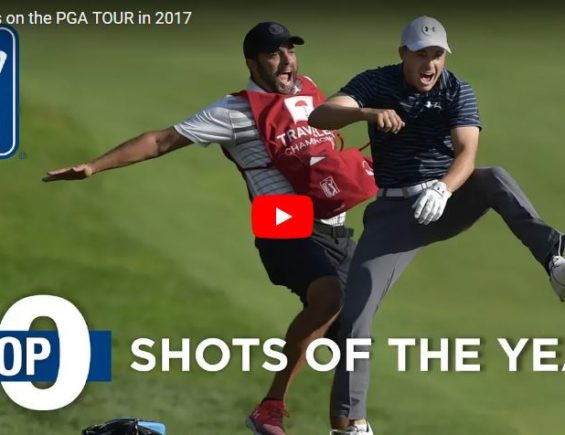 [embedyt] https://www.youtube.com/watch?v=SIKCzJO0jKs[/embedyt] Check out the top 10 shots of the year on the PGA...

An incredible bunker shot on the 72nd hole at the John Deere Classic puts...