Situated slap bang in the middle, Pinnacle Point is an equidistant 400km from both Cape Town and Port Elizabeth. The eighteen-hole championship course, opened in 2006, immediately reaped praise and acclaim from both national and international golfing communities and has since gone on to be consistently rated in South Africa’s top twenty courses.

Designed by celebrated golf architect Peter Matkovich and pro golfer Darren Clarke, Pinnacle Point Golf Course is one of the Garden Route’s essential destinations. Pinnacle Point inspires you to play its challenging layout with a level of respect due to the dramatic views and breathtaking terrain. The 72 par layout is characterised by 7 majestic holes that line the Indian Ocean rock cliffs, four of which are played over ocean and cliff. All 18 holes have been designed to fit the contours of the land. 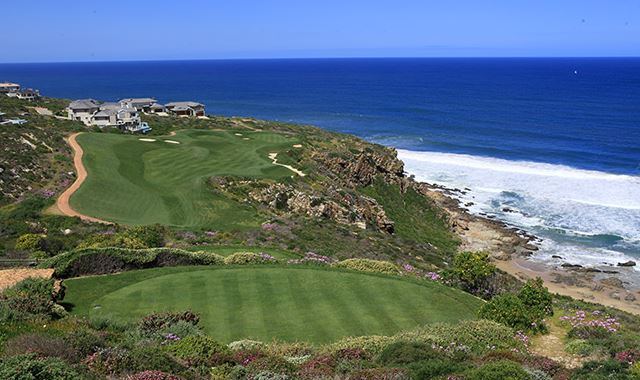 The golf course is on an undeniably dramatic landscape, which slopes from high above the neighboring Indian Ocean to rugged and dramatic cliffs bordering the estate. The natural undulations lead through a kaleidoscope of some of South Africa’s best natural fynbos and the contrast of earth colours and sea make for picture-postcard splendour. 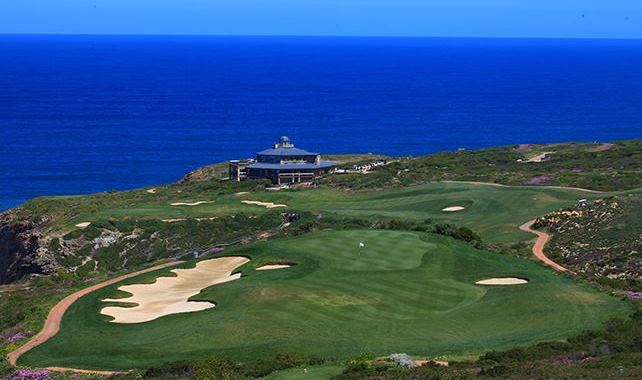 This contrast of drama and beauty has allowed Matkovich to create individual masterpieces to accomplish the collective of a links style 18 holes. Quite unique, and surely these days some of the world’s most photographed holes, are the seven holes that perch precariously along the cliff edge and collectively intimidate as well as seduce the golfer with both their challenges and their beauty. 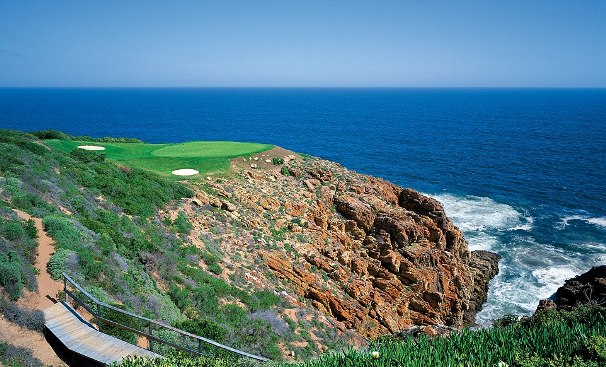 The short par 3, 13th hole, for example, with the tee and the green perched on the cliff edge requires the golfer to hit over a deep gorge and the margin for error towards the ocean is minimal (non-existent actually!) and though a bail-out scenario is available to the left, both ego and sheer adrenaline will lead one to want to truly play this masterpiece as it is meant to be tackled. The golfer will find three more holes asking for deep gorges with spectacular ocean views (and sounds) to be undertaken, but these are mere punctuation marks on the whole experience, which is quite spectacular. 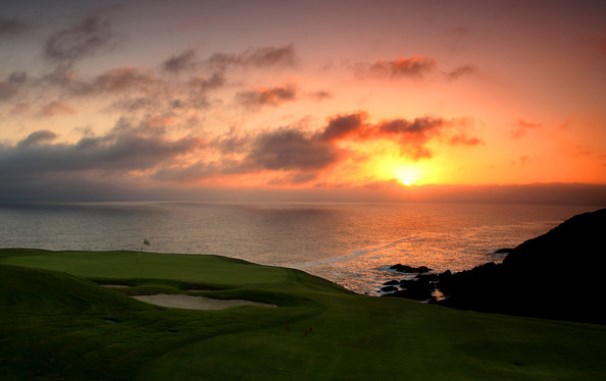 The first three holes are uphill and lead one away from the ocean vistas, but it is from then on that the canvas, which Matkovich described, is encapsulated as a whole from a high vantage point leading back downwards towards those aforementioned cliffside marvels. Quite remarkably, the undulations of this terrain have not resulted in a hilly course (apart from the first three opening uphill challenges and the 10th), as the contours have provided excellent natural shelves on which the designer has made the best use of the routing, while the views on offer throughout the 18-hole experience. The smack of salty sea breezes, the rush of fragrant fynbos and thrill of seeing wildlife, dolphins and whales contribute to a sublimely sensory golf experience.

According to Peter Matkovich this is: “The most dramatic golf course site I’ve ever encountered anywhere in the world!”.

The Majlis championship course is a challenging par 72, 7,301-yard layout. Designed by Florida-based...

Regarded as one of the best courses in Sweden, Ullna Golf Club also has...

One of the most select clubs on the Costa del Sol. Set in beautiful...