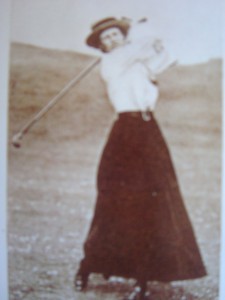 Golf came to Yorkshire in 1887 when the Cleveland Golf Club was founded and others soon followed. The ladies of those days also played golf. The Yorkshire Union of Golf Clubs was formed in 1894 and in that year they held their first Championship Meeting at Huddersfield. The Union invited the ladies to play a Competition on the very first day of this meeting.

Golf progressed for these lady golfers and in February 1900 they met to discuss “whether a County Golf Club would prove to be a great advantage to the players of Yorkshire.” The answer was a resounding YES. So the Yorkshire County Golf Club was formed with subscriptions at 2/6d per year (£0.121 p) The County Colours were chosen as Lincoln Green with a white rose and golf clubs crossing. These colours were put on the County Hat Band which cost 4/- (£0.20p).

The next meeting was held in March and County matches fixed against Lincolnshire, Lancashire and Cheshire.

There were 47 members in the first year. At the AGM in November it was resolved to buy by subscription a County Challenge Bowl to be competed for by the County members with a handicap limit of 18. The first Challenge Bowl Meeting was held at Ilkley in 1901. The entrance fee was 1/-.(£0.05p) Miss Bertha Thompson (Beverley) beat Miss Jackson also from Beverley by 4/3.

In 1902 the Yorkshire Union agreed to run a County Championship for the ladies prior to their own Championship. They offered a beautiful trophy of value 25 guineas. The format was to be 18 holes strokeplay followed by matchplay for the ladies with the four lowest scores. The entrance was 2/6d. (£0.121 p). Eighteen ladies entered and the winner was Miss B. Thompson (Beverley) who overcame Miss H. Firth (Headingley) by 3&1.

In the early years each Club was responsible for allocating handicaps for its members. This caused many problems and the Secretary of the LGU Miss Issette Pearson suggested an LGU system to standardise the handicaps. Many Clubs were against this but Yorkshire took the bull by the horns and adopted the LGU System in 1906. In praise of Yorkshire’s stand Miss Pearson wrote “if the system can work in a County where there are more than 19 associated Clubs it can be satisfactory anywhere provided, of course, it is worked in the same manner and with good organisation.”(Source: http://www.ylcga.org/index.html)