With the prevalent marine layer, rolling sandy dunes, blistering wind and rugged coastline, Spanish Bay golf course evokes the original Scottish feel of the game. Tom Watson who shot a 65 on the opening day said, “you can almost hear the bagpipes,” and you actually can most evenings as a bagpiper serenades the sun as it sets into the Pacific.

A majority of the front nine, including the closing five holes, are played among the sloping dunes. Views of the Pacific Ocean are dramatic while the extremely undulating, multi-tiered greens, will have you testing your imagination. Throughout the links are patches of environmentally sensitive areas which are off limits to golfers in order to protect the endangered dune vegetation. Course rules allow for a free drop if you end up astray in the protected locations. When the north-west trade winds are up, it makes for a challenging round.

The opening hole makes a bee line from the clubhouse down to the ocean. The 307-yard second hole might elicit nonchalance on the tee because of its length, but it’s a good, sandy test of every player’s driving skill. On the front side, holes three and five also play down to the crashing waves. The sixth is 418 yards of fairway accompanied by bunkers along its entire right side, the sandy way home funnelling tighter as the fairway approaches the green.

The first three holes on the back nine evoke a parkland feel as they meander through elegant Monterey pines before the par-five fourteenth brings you back to the ocean. Number fifteen, called “Missing Link,” requires a drive to an island landing area left of bunkers, and a second shot that ascends gorse and dunes to a wavelike green.

Not enough can be said about the wonderful golfing experience that is The Links at Spanish Bay.  This links style golf course weaves its way through the dunes of the Monterey peninsula on the front side, while taking a brief side trip through the forest to start the back nine before plummeting back to the ocean to finish the round.  Views of the ocean are available on most holes and the course is always in mint condition. 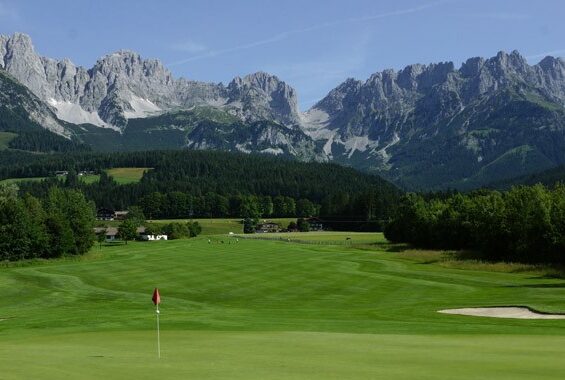 Embedded in the rolling hills of the majestic “Wilder Kaiser” mountains, lies the 27...

The Aquarius Golf Club was founded in 1912. Located in Honor Oak, London This...