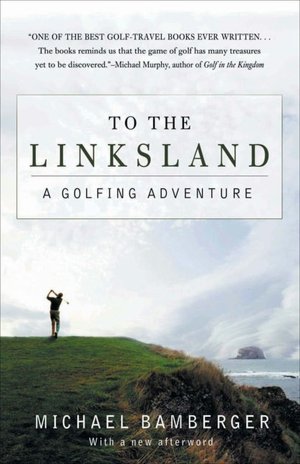 Golf buff Michael Bamberger took the plunge. He dropped out of the workaday world, and into the world of golf. He gave up his apartment, took leave from his job and, with his newlywed wife, embarked on a unique golfing adventure: from the United States to Scotland by way of the European golf tour, breeding ground for the game’s most exciting players.

To get close to the players, the writer became a caddie, and before the year was out, he had caddied in the national championships of Portugal, France, Spain, Italy, Belgium, Ireland and finally Scotland, ancestral home of golf. In Scotland the author began a search for primal golf, a search that took him to a secret course, built by a shepherd and maintained by his sheep, miles from civilisation. This is the memoir of Bamberger’s golfing pilgrimage.

In joining the author on his journey, we ride an all-night caddie bus on the back roads of Spain and Portugal, play golf courses in Paris, Florence, Madrid, MonteCarlo and all through Scotland. We are shown the sleeping gems of Scottish golf. We meet Seve Ballesteros, Ian Woosman’s father, Arnold Palmer’s British caddie, and the ghost of Old Tom Morris. We visit the home of Captain P.W.T. (Paddy) Hanmer, retired secretary of Muirfield, a man who made American corporate chieftains shake in their loafers.

About the Author
Michael F. Bamberger is a senior writer for Sports Illustrated and the author of multiple books including Wonderland: A Year in the Life of an American High School and The Man Who Heard Voices: Or, How M. Night Shyamalan Risked His Career on a Fairy Tale. He is also the author of the play Bart & Fay,” about the long time relationship of Bart Giamatti and Fay Vincent. He was also a reporter for the Philadelphia Inquirer.

Vicente Ballesteros was born on a twelve of March in Pedreña (Santander) Spain. He...

Shared from GolfPunk Mercedes-Benz have partnered with golf cart manufacturer Garia to produce a prototype...