There are amazing people everywhere in our world, constantly breaking barriers no matter how many times they are told that what they are trying to achieve it is not possible! When someone is determined to break barriers their courage, perseverance, and tenacity will amaze even the most sceptical of us. Once again the golf world leaves a testimony that impossible is a word just to be used by those that not dare! Suddenly that familiar slogan echoes in our ears: “Yes we can!”, and we are not discussing any political issues.

Blind golf is outstanding in the area of disabled sports in that it includes only minor modifications to the standard rules of golf. The principle of playing is that blind or partially sighted golf players have a sighted coach who assists the golfer in describing distance, direction and characteristics of the hole, and helps with club head alignment behind the ball, prior to the stroke. From this point, the golfer is on his own, and it is her/his skill that determines the resulting stroke.

Other than the coach, there is only one relaxation to the standard rules: blind or partially sighted golfers are allowed to ground their club in a hazard.

The earliest record of blind golf is from the 1920s in the USA: Clint Russell of Duluth, Minnesota, who lost his sight when a tire exploded in his face, began playing blind golf in 1925. Gradually increasing his scores, Clint managed to shoot an 84 for 18 holes in the early 1930s.

Blind golf competitions are set in classes determined by the golfer’s level of sight, using the same categories as in other branches of sport played by the visually impaired:

The first hole-in-one recorded by a blind or visually impaired golfer in a National Open was scored on September 15, 2004 by Jan Dinsdale, a B2 lady from Northern Ireland. It was on the 115 yard second hole at Shannon Lake Golf Club in Kelowna, British Columbia during the Canadian Open Tournament..

There are currently nine member countries in the IBGA: Australia, Canada, England, Germany, Ireland, Japan, Northern Ireland, Scotland and the United States of America. Links to their web sites are given below.

The IBGA produces a taped version of the Rules of Golf for the visually impaired audience, when the rules of golf are revised every four years. 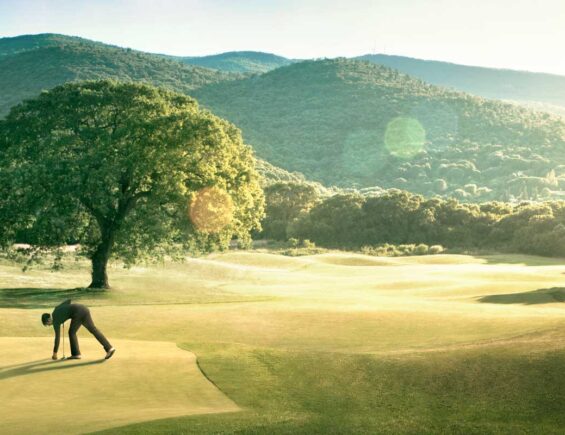 The course boasts one of the most scenic locations in Ireland perched on cliffs...