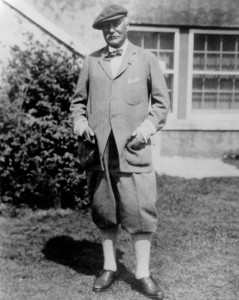 Macdonald was born in Niagara Falls, Ontario to naturalized American parents — a Scottish father and Canadian (part Mohawk) mother — and grew up in Chicago. In 1872 at age 16, he was sent to St Andrews University, and while there he took up playing golf with a vengeance. Tutored by Old Tom Morris, Macdonald soon became proficient enough that he played matches on the Old Course at St Andrews against several of the leading golfers of the day, including Young Tom Morris. Macdonald returned to Chicago in 1874 and became a successful stockbroker, but rarely played golf for the next 17 years (a period he termed the “Dark Ages”). 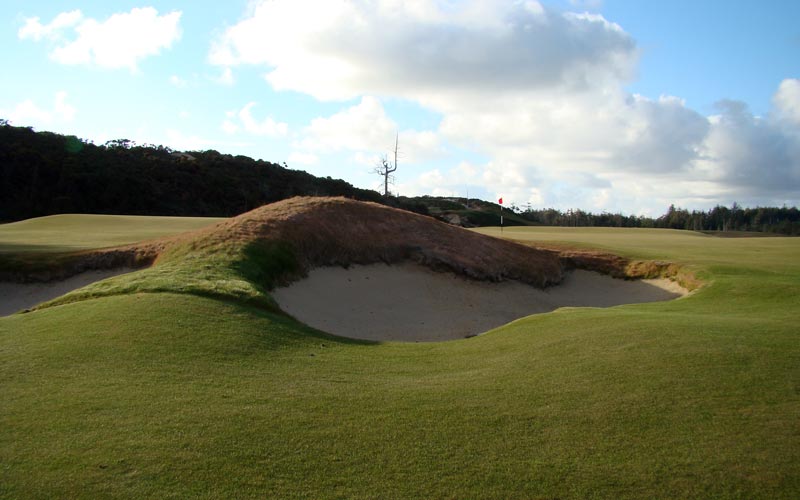 By the late 1880s, a group of Scottish immigrants had brought the game to the New York City area at the St. Andrew’s Golf Club, and in 1892 Macdonald convinced several associates to begin playing, and founded the Chicago Golf Club. He at first built nine rudimentary holes, which was the first golf course west of the Allegheny Mountains. In 1893 he expanded the course to 18 holes, creating the first full-length course in the United States. The Chicago Golf Club decided to move to a more permanent home in Wheaton, Illinois, and in 1895 Macdonald built a new 18-hole course there, which is still the club’s home today (the original 1892 site is now the Downers Grove Golf Course). 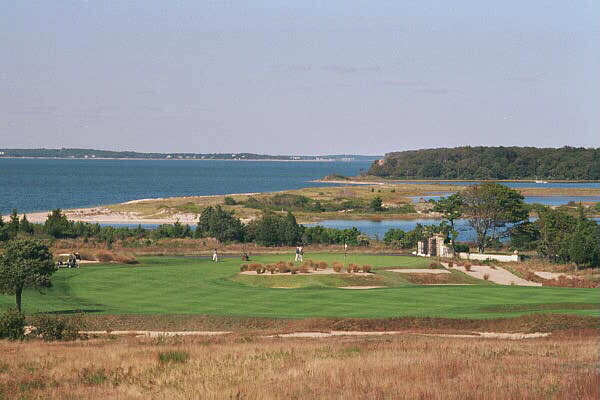 In 1894, the Newport Country Club and St. Andrew’s Golf Club both held “national championship” tournaments. Macdonald finished second in both, and on both occasions he angrily denounced the manner in which each competition was held, with the result that both tournaments were declared unofficial. That fall, delegates from the Chicago Golf Club (including Macdonald), St. Andrew’s, The Country Club, Newport Country Club, and Shinnecock Hills Golf Club met in New York City to resolve the problem. The result was the formation of the United States Golf Association (USGA), which would administer the official championship. Macdonald was named Vice President of the organization. The first U.S. Amateur was held in 1895 at the Newport Country Club, and this time Macdonald won, beating Charles Sands 12 & 11 in the final (which is still the record winning margin). 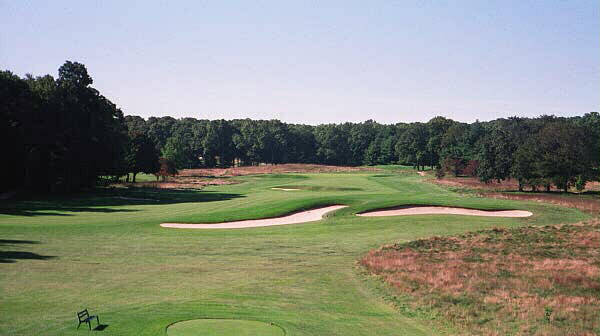 In 1900, Macdonald left Chicago to live in New York, becoming a partner in the Wall Street brokerage firm of C.D. Barney (through mergers, now Smith Barney). With only a couple of exceptions, most golf courses in the U.S. at that time were laid out in rudimentary fashion, with little strategy required of the golfer. Macdonald, by virtue of his experiences at St Andrews and later trips to Great Britain, was determined (not immodestly) to build the most noteworthy course outside the British Isles. He searched Long Island for a suitable site to emulate the classic seaside links of Scotland, and eventually settled on a site in Southampton, New York (near Shinnecock Hills Golf Club) in 1906. He dubbed the Southampton home at 119 Whites Lane “Ballyshear” and the house was designed by F. Burrall Hoffman. The home was purchased by Michael Bloomberg in 2011. 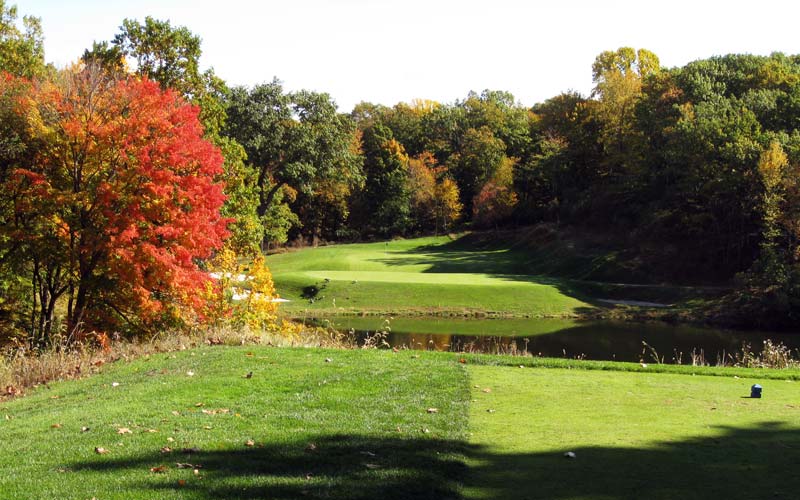 In 1908, he organized a group of 70 founders to contribute $1,000 each, and the National Golf Links of America opened for play in 1909. Many of the holes were his versions of famous holes from British courses, a pattern he would repeat on later courses. Macdonald would tweak the course for the rest of his life, altering every hole somewhat over the next 30 years. The course hosted the inaugural Walker Cup in 1922, and is considered a landmark of golf architecture even today. In 2005, Golf Digest ranked it the #9 course in the United States. 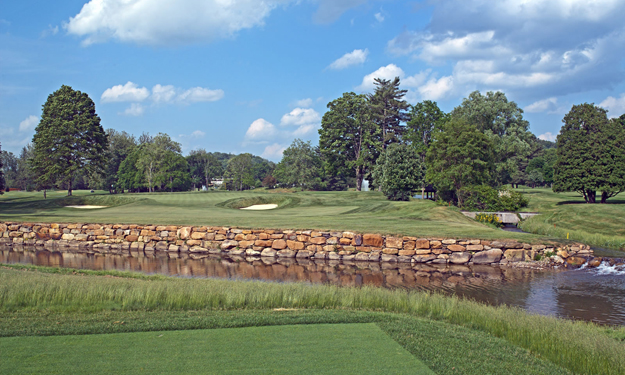 With the National Golf Links course, Macdonald began collaborating with Seth Raynor, who would later become a famous golf architect (a term coined by Macdonald in about 1910) in his own right. The pair would collaborate on a number of courses over the years, including Piping Rock Club in Locust Valley, New York, the Yale University golf course, the Old White Course at The Greenbrier, and Mid Ocean Club in Bermuda (a course conceived to escape the reach of Prohibition). One of the most famous was the Lido Golf Club, a course which took an enormous amount of effort to construct and had several unique holes, and was considered at least on par with the National Golf Links while it existed (a course by the same name exists on its location today, but it was built by Robert Trent Jones in 1947). 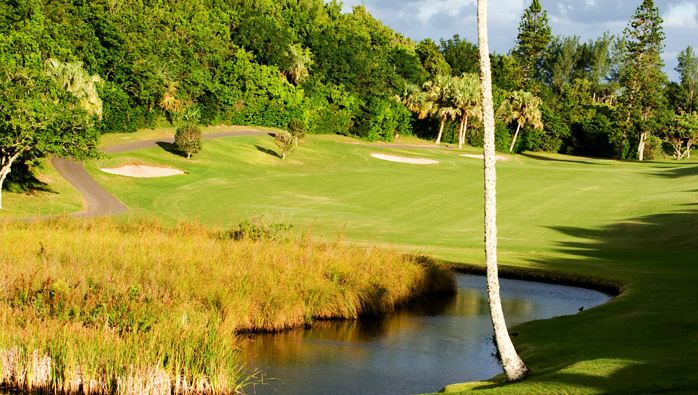 In 1928, Macdonald published his book Scotland’s Gift: Golf, which covers the spread of golf (prominently featuring himself) in the United States from its beginnings in the early 1890s to 1927, when there were some 4,000 courses in the country. It devotes several chapters to four of his courses, and gives his design philosophy. He is often called the “Father of American Golf Architecture”.

In 2007, Macdonald was elected as a member of the World Golf Hall of Fame, in the Lifetime Achievement category.

Marco Croze is considered Italy’s most diligent golf architect and one of the best...

David McLay Kidd was born and raised in the Scottish lowlands; you might say...