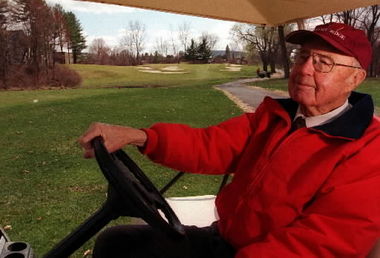 Geoffrey S. Cornish (August 6, 1914 – February 10, 2012) was a golf course architect, author, and a fellow of the American Society of Golf Course Architects.He designed over 200 courses, including 9-hole additions, around the world. Born in Winnipeg, Manitoba, Cornish received a bachelors degree from the University of British Columbia and a Master’s from the University of Massachusetts, both in agronomy.

His interest in golf course architecture was aroused upon graduation in 1935, when he was hired to evaluate soils and find topsoil on the Capilano Golf Club, then under construction in West Vancouver, for Canadian architect Stanley Thompson. Cornish then continued his training for four years with Thompson before becoming Head Greenkeeper at St. Charles Country Club, Winnipeg.

During World War II, Cornish served with the Canadian Army Overseas (1941–1945). After the war, he returned to become an associate of Stanley Thompson from 1946-47. This was followed by a five-year association with pioneer turf grass scientist Lawrence S. Dickinson at the University of Massachusetts Amherst.

During his first years as a designer, Cornish was assisted in artwork and drafting by his wife, the former Carol Burr Gawthrop. He soon established himself as a competent designer, and in 1964 took on a partner, young Penn State graduate William G. Robinson. Robinson moved to the Pacific Northwest in 1977, and established the firm of Cornish and Robinson, Golf Course Designers, Ltd. of Calgary, Alberta. They prepared the publication Golf Course Design: An Introduction, distributed by the National Golf Foundation and used in many GCSAA classes.

By 1980 Cornish had planned more courses in the New England states than any other architect in history. He had also designed and remodeled layouts in other parts of the United States, in Canada and in Europe. He was the author of numerous articles on course design and turfgrass subjects. In 1981 he received The Golf Course Superintendents Association of America Distinguished Service Award, and in 1982 the Donald Ross Award. In 1996, he was inducted into the Canadian Golf Hall of Fame.

Cornish continues to write and teach. Long a contributor to a Harvard Graduate School of Design class on Golf Course Design and the University of Massachusetts’ Stockbridge Winter School for Turf Managers, he has published numerous books on course architecture, including the pioneering and widely read The Golf Course, which he co-authored in 1981 with Ron Whitten, golf architecture editor for Golf Digest magazine. A second edition of this book, by the same authors, was published in 1993, with the title The Architects of Golf.

In the 1980s and 1990s Cornish and fellow golf architect Robert Muir Graves conducted scores of design seminars across the continent under separate auspices of the Harvard Graduate School of Design, the GCSAA and the PGA.

Numerous awards were bestowed upon Cornish during his career. He received a Distinguished Service Award from the GCSAA in 1981, the Donald Ross Award from the ASGCA in 1982, and an Outstanding Service Award from the National Golf Foundation in 1984. In 1987 he was awarded an honorary doctorate from the University of Massachusetts. In 1991 he received the John Reid Lifetime Achievement Award from the Metropolitan GCSA. He is an honorary member of several golf course superintendents associations as well as the EIGCA. Cornish was admitted to the Canadian Golf Hall of Fame in 1996.

Known for traditional golf course designs, Geoffrey Cornish, would simply lay the course out on the land instead of moving millions of yards of dirt. An example of this approach can be experienced at such courses as Bowling Green Golf Course in northern New Jersey, it lends the course both beauty and playability. Taking full advantage of the land and its natural features you enjoy the natural surroundings as well as the golf (and it takes less time to play).

Steve Marnoch (born in 1961) is a Scottish landscape and golf course architect, passion...

A true pioneer in the purest sense is the best description of Javier Arana,...