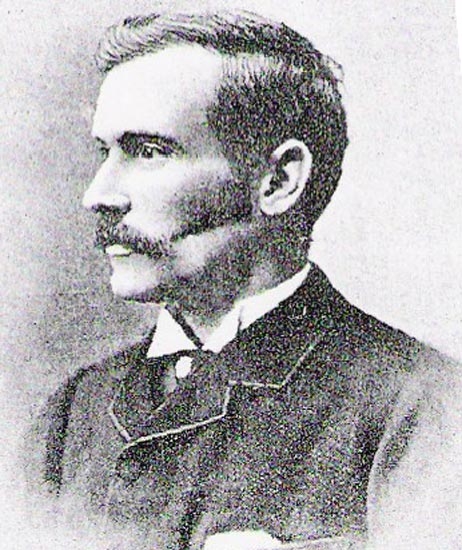 Willie Park-Jr. was born in 1864 at Musselburgh. ËœAuld Wullie’ was a rival of Old Tom Morris, and one of the greatest golfers of his day. The elder Park won the first Open Championship in 1860, and then again in 1863, 1866 and 1875. Mungo Park, Old Willie’s brother, won the belt in 1874. Young Willie followed in their footsteps and began competing at an early age.

In 1880, at the age of 16, Willie Park-Jr. was appointed greenkeeper and professional at the Ryton Golf Club in northeast England, his uncle Mungo was the pro at nearby Alnmouth. Willie later admitted he spent as much time at Alnmouth as he did at Ryton. One gets the impression he leaned heavily upon his uncle. Willie returned in Musselburgh in 1884 to assist in his father’s club-making business. Old Willie’s health was on the decline.

Willie Park-Jr. won his first Open Championship in 1887 at Prestwick and repeated the feat in 1889 at Musselburgh. Like his father before him he never refused a big money match. In 1888 he issued his famous‚ £100 challenge to the world, and over the next decade met every great player of his era with mixed results although on balance he won more than he lost. As a golfer Park was known for two main attributes: a very cool demeanor and a wonderful putting stroke. Even in adversity he always kept the same placid exterior. Horace Hutchinson suggested he would have been better served letting off a little steam now and again, especially in the heat of a match. Ironically the man best known for high stakes matches was considered more dangerous in medal play.

On the business side Park established a successful golf equipment operation with shops in London, Edinburgh, and Manchester in addition to the original Musselburgh shop. In 1895 he made a tour of America, playing in number of arranged matches although his primary objective was to promote his business and open a shop in New York (which he did although it ultimately failed due to heavy tariffs). On this visit he agreed to become the professional at Shinnecock Hills, commencing in the spring of 1896. The following year his return was delayed so Shinnecock was forced to go another direction. One has to wonder how history would have been altered had he taken the position.

Near the end of the 1890s Park was so busy with business he had little time for playing the game. Despite his inactivity he nearly won his third Open Championship in 1898. Willie played brilliantly and led throughout but missed a three-foot putt on the final green to tie Harry Vardon. Following a heated debate over who was the better player the famous Vardon-Park challenge match was arranged – thirty-six holes at Ganton and thirty-six holes at North Berwick. It was dubbed the match of the century and drew enormous interest 10,000 spectators were on hand at North Berwick, thought to be the largest golf gallery to that point. In the end Vardon won 11 and 10 but the loss did nothing to diminish Willie’s reputation, if anything it was enhanced.

Park’s first design effort came at Innerleithen in 1886, where he was sent as a substitute for his father, but his architectural career didn’t start in earnest until the boom of the 90s. There has been an assertion that father and son collaborated during these years but I’ve yet to find evidence the two ever worked together. In fact Old Willie was more or less inactive after 1886 due to failing health. He passed away in 1902.

Willie Park-Jr. is recognized today as one of the great golf architects in history, however that reputation was not made based on his work in the 1890s. The following is a chronological list of courses Willie Park designed or redesigned in the nineties:

Make note there are two high-profile courses normally associated with Park missing from the list – Silloth and Western Gailles. Silloth-on-Solway was laid out by his friend David Grant and constructed by his uncle Mungo Park. Willie did inspect the course near the end of construction, and was said to be very impressed, but credit should not be assigned based upon an inspection or last minute advice. The confusion surrounding Western Gailes was due to the fact Willie listed Gailes, Ayshire as a golf course he designed, but that course was Glasgow Gailes, designed in 1912. Western Gailes was designed and built in 1897 by the greenkeeper F. Morris. A third course deserves mention as well, that would be Burntisland. The club claims Park designed their new course at Dodhead in 1896. The club did acquire the Dodhead property in 1896 however they were not playing golf at that site until 1899, and it is unclear if Willie is responsible for the 1899 layout or was involved in a later redesign. We do know the greenkeeper John Drurie carried out a number of changes in the early 1900s.

During the nineties to say Willie Park distinguished himself would be a mischaracterization. His golf courses were no better or worse than most of his contemporaries, and he followed many of the common practices of the period the cop bunker, the straight out and straight back approach to routing, the crossing hazard often placed at regular intervals and a generally penal approach to hazard placement. Much of this is documented in his 1896 book The Game of Golf in which Willie dedicated a chapter to golf course design. But there were also advancements evident in that book. Park was developing some progressive ideas beyond the old stereotypical ones, for example promoting the use of natural hazards and the importance of variety.

Like most of his fellow architects at that time Park’s success (or lack of success) could easily be predicted. When given good material near the sea he produced good results, when given an ordinary inland site he did nothing of consequence â€that is until 1899. That year he began Sunningdale, and it was a major advancement. It was considered revolutionary for two primary reasons: first its scale was enormous for that time, and secondly the severity of the site, not only topographically but also in the nature of the ground. At that time it was considered unadvisable to make a course over sandy ground overgrown with heather. Sunningdale was the first course to be wholly sown from seed, at a considerable cost I might add.

Soon after being engaged at Sunningdale Willie began Huntercombe, and it was another breakthrough design. Huntercombe was unusual for its use of hazards man-made and natural and strategically placed in central and flanking locations. These two courses were constructed simultaneously, and Willie reportedly made frequent trips back to Musselbourgh seeking inspiration. That was a novel approach as well. Both Sunningdale and Huntercombe opened to positive reviews in 1901, and were tremendous improvements over the dreaded Victorian courses, but one should not get the impression they were polished gems. Golf architecture improved incrementally not overnight.

Willie Park’s history is a microcosm of golf architecture history. Producing inconsistent quality in the ninties followed by very good to excellent work in the decades that followed. After suffering from a nervous breakdown’ Willie Park died in 1925 at an Edinburgh nursing home. (source)

Dan Blankenship born the 24th February 1961 in Colorado, USA, was about as far...