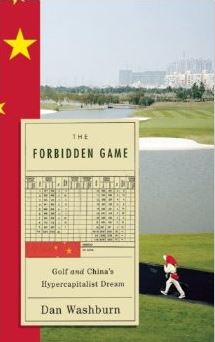 Statistically, zero percent of the Chinese population plays golf, still known as the “rich man’s game.” Yet China is in the midst of a golf boom — hundreds of new courses have opened in the past decade, despite it being illegal for anyone to build them.

We meet Zhou, a peasant turned golf pro who discovered the game when he won a job as a security guard on one of the massive construction sites, and who sees the game as his key to the emerging Chinese middle class; Wang, a lychee farmer, whose land is confiscated for an “ecological park” and resorts to setting up a food kiosk on a nearby track; and Martin, a Western executive maneuvering around China’s bureaucracy, as well as Thai gangs, ever watchful for Beijing’s “golf police.” The Forbidden Game is a rich and engrossing portrait of the world’s newest superpower and three very different paths to the “Chinese Dream.”

Dan Washburn is an award-winning reporter and managing editor at the Asia Society. His writing has appeared in the FT Weekend Magazine, The Economist, the Atlantic Monthly, Foreign Policy, Golf World, Slate, and ESPN.com. He is also the founding editor of Shanghaiist.com — one of the most widely read English-language websites about China. After a decade spent living in China, he now lives in Brooklyn, NY.

This is one of the most unusual and enjoyable golf books ever. It looks...