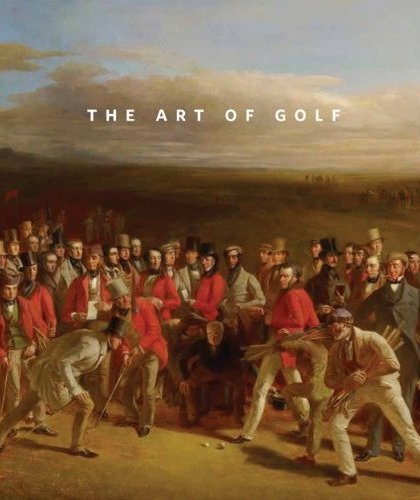 The game of golf, as we know it today, appears to have been first played in North America in the late eighteenth century. By 1895, more than 125 golf clubs were established in the United States. Despite its popularity and prominence in the American cultural landscape, it is surprising that the sport has not attracted artists on a grand scale.

No iconic American painting taking golf as a subject comes to mind, yet art and golf have intersected in some interesting and important ways. The Art of Golf reveals to us renderings of golf as art, alongside essays that give us a historical understanding of the game in its cultural context.

Catherine Lewis, Richard Lewis, and Rand Jerris contribute an essay that explores how the concepts of leisure, social aspirations, and the American character were expressed in relation to golf by artists in the United States. Tico Seifert examines the game’s Dutch antecedent and the buoyant market for highly finished, detailed genre scenes full of incident and vivid observation that flourished in the Netherlands in the sixteenth and seventeenth centuries. Jordan Mearns explores depictions of golf in Scottish art from the middle of the eighteenth century to the late nineteenth century through the work of a wide variety of artists.

Dr. Catherine Lewis is a professor of history, director of the Museum of History and Holocaust Education, and Executive Director of Museums, Archives, and Rare Books at Kennesaw State University. Dr. Richard Lewis is an expert on nineteenth-century American art and culture and is Curator of Visual Arts at the Louisiana State Museum. Dr. Rand Jerris is a librarian, historian, and Senior Managing Director of Public Services for the United States Golf Association. Dr. Tico Seifert is Senior Curator of Northern European Art at the Scotish National Gallery and is currently preparing the catalogue of Dutch paintings in the National Gallery of Scotland. Jordan Mearns is a research assistant at the Scottish National Gallery and PhD candidate at the University of Edinburgh.

For the first time in paperback–the book in which America’s preeminent designer of golf...

Some new lingo to use when you’re out on the course, very funny and...