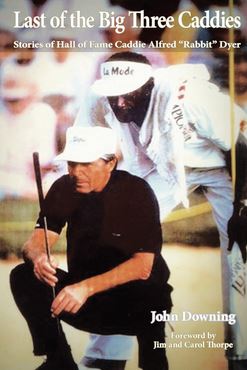 Jack Nicklaus, Arnold Palmer and Gary Player are known as the Big Three. Their caddies were Angelo Argea, Earnest “Creamy” Caroline, and Alfred “Rabbit” Dyer. Rabbit is the last of the big three caddies to tell the tales. Take a look inside the ropes with Rabbit and hear his stories that span over fifty years on the PGA tour and twenty of them with the Black Knight.

The Metairie Country Club in New Orleans is where Rabbit first caddied professionally for Ben Hogan at the age of ten. He went on to the Southern Swing across America to caddie and win with Tony Lema, Dave Stockton, Charlie Sifford and so many others who became golf’s greatest. Rabbit took on apartheid in South Africa with Gary Player only to move on to that much talked about British Open win in 1974 where he was the first black to caddie at St. Annes. Rabbit is truly one of Golf’s legends and these are his stories.

John Downing met Alfred “Rabbit” Dyer at the 1977 US Open and asked him for his autograph. Little did he know that thirty-six years later John would meet Rabbit again, after Rabbit retired from caddying from Gary Player over twenty years. Rabbit remembered John and asked him to write his life story, The Last of the Big Three Caddies. Rabbit is one of the most legendary caddies in golf history, the first to caddie all four majors and the first black to caddie and win the British Open.

Masters of Men is the story of one journey taken, over half a century...

Many golfers choose to save money by using lake balls rather than forking out...