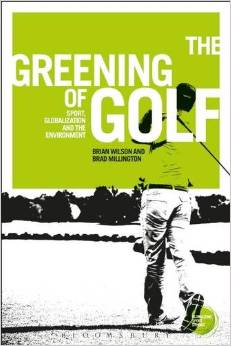 Golf is a major global industry. It is played by more than 60 million worldwide, and there are more than 32 000 courses across the globe in 140 countries including Africa, Central America and Central Asia. It is a sport that has particularly appealed to the wealth and powerful, though it is increasingly successful in attracting both golfers and spectators from a wide range of demographics.

Golf has attractedcriticism regarding its impact on the environment, with particular concerns about its use of pesticides and the resulting impact on both wildlife and humans, and its excessive use of water. The golf industry has (over time) responded to these and other concerns by stressing their capacity for recognizing and dealing with environmental problems.

There are, however, reasons to be sceptical about the golf industry’s environmental leadership, or, indeed, corporate environmentalism in general. This book looks at the power relationships in and around golf examining whether the industry has demonstrated such leadership on environmental matters that the government can trust them to make weighty decisions that have implications for public health, and what it is about sport and leisure in general and golf in particular that has inspired such latitude from government.

This is the first comprehensive study of the varying impacts of golf on the environment, It is based on extensive empirical research, including interviews with major stakeholders in the golf industry and members of protest groups. The authors examine golf as a sport and as a global industry, drawing on three discrete literatures – the study of sport as a global social movement, environmental sociology and the study of corporate environmentalism.

Although popular author offers no guarantee for a lower golf score, he does offer...

The 2007 golf comedy, Fairway to Heaven (a play-on-words on the classic Led Zeppelin...