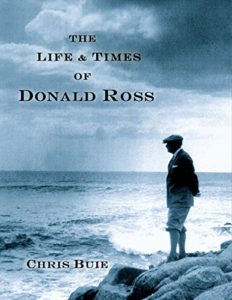 During the early years of the 20th Century, golf became a fundamental part of the American Dream. Perhaps more than any other individual, Donald Ross helped to establish the sport in his new country. His place in history has essentially been that of a prolific architect who created some of the finest examples of the form.

However, the true extent of his achievements go well beyond the consensus view. With surpassing style and insight, The Life & Times of Donald Ross re-configures his place in history and establishes the man as a notable figure in the broader field of American culture.

Chris Buie has been playing the Donald Ross courses of the Pinehurst area for over four decades. He has been featured in the Wall Street Journal discussing Ross and is a frequent contributor to Golf Club Atlas.

Most incredible golf shot ever made gets free lettuce wraps for America and $25,000...