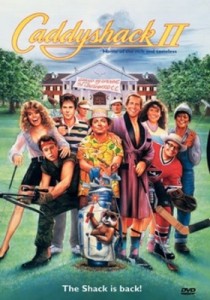 Jack Hartounian is a rich man who always gets what he wants. When the strict rules of an upscale country club deny him membeship, he wants revenge. Retaliation comes in the form of turning the tables on the snooty country club and changing their upscale standards into downtown trash.

This comedy returns to the exclusive but crazy country club golf course seen in the original Caddyshack.

Why Australia’s kangaroos flock to the fairways If you’re strolling along a fairway in...