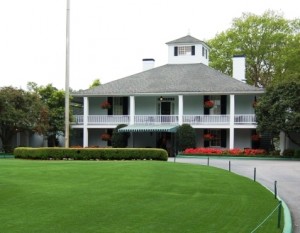 The Champions Dinner has been an annual tradition at The Masters since 1952, when Ben Hogan suggested and hosted the first dinner.
The idea is simple: Winners of The Masters are members of an exclusive club, so they get together each year on the Tuesday night of tournament week all wearing their masters green jackets to welcome the previous year’s winner to the club. That club is officially known as the Masters Club, but unofficially the gathering is called the Champions Dinner.

The previous year’s winner gets to select the menu (and pick up the tab!). Over the years, the dinner fare has ranged from cheeseburgers to sushi to haggis* (if you don’t know what haggis is, you’re better off that way).

But the former champs aren’t required to eat what the defending champion selects. If the reigning champ’s taste isn’t to the taste of other Masters winners in the room, they can order off Augusta National’s regular menu (which includes steaks, chicken and fish dishes).

Our favorite Champions Dinner menu was the one offered by Tiger Woods in 1998: cheeseburgers, chicken sandwiches, french fries and milkshakes. Hey, Tiger was only 22 at the time.He must be glad he did not win last year or all the humble pie jokes would be doing the rounds.

It’s difficult to find info on Champions Dinner menus from the early days of the event, but more recent menus are usually reported in the media in the weeks leading up to The Masters.

Here is a sampling of Champions Dinner fare (the source for most of the pre-2000 menus listed below is a 1999 article in The Augusta Chronicle by Emily Sollie):

Tiger Woods, 2002: Porterhouse steak and chicken with a sushi appetizer.

Golf courses aren’t in as much financial trouble as other sectors of the market...

Mijas Golf Resort, is situated in the valley of Mijas, north of Fuengirola, Spain,...