If you’ve ever wondered why your favorite player looks more like a NASCAR driver than he does a golfer, take a look at this interesting graphic, sent my way by Nick Jenkins. The graphic ballparks what players make to wear a company’s logo, citing no fewer than nine strategic placements. 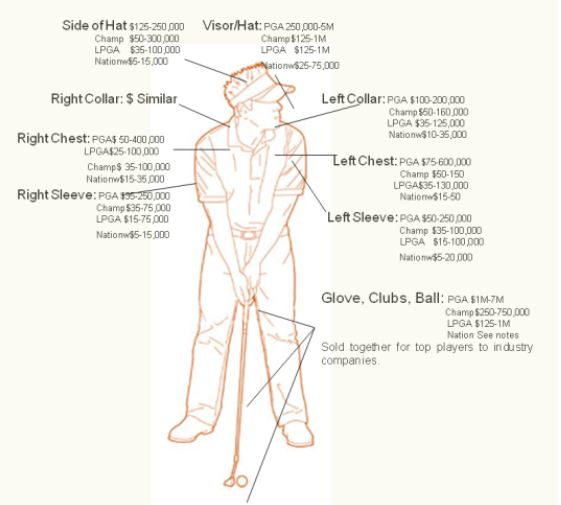 Published in 2011 by Crescent Partners CurtComm, the numbers should still be relatively valid, but keep in mind that these numbers don’t represent every player across each of the tours cited — Joe Lunchpail who lives out of his car trying to Monday qualify for events isn’t raking in these numbers.

The content that accompanies the graphic in the original post notes the following interesting points regarding pricing:

One other item I found of interest — Nike is a “clean company” — meaning that no other company’s branding can appear on Nike apparel. So if you are looking to sponsor a Nike man, you’ll be limited placing your logo on the bag (like Fuse Science does with Tiger Woods).

Interesting stuff. You can read the original post over on Crescent Partners CurtComm.

Shared from Trendy Golf Magazine Lyle & Scott is a brand rich in tradition...

The idea was simple: To create the worlds finest golf shoe. They had to...

The streets of London are full of strange and wondefull things however recentley golf...