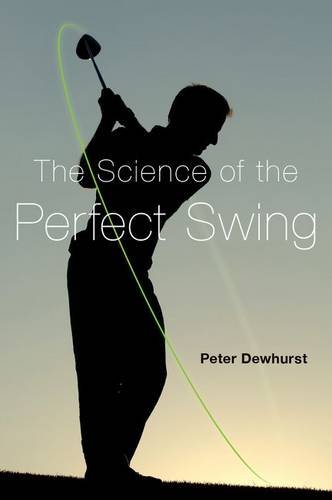 While golf has a popular following among casual fans, it has become popular among another passionate yet unlikely group: scientists. Beyond the caddies, carts, and clubs, the game of golf is an applied science. The seemingly simple act of striking a golf ball invokes a wide range of processes, including physics principles such as energy transfer, kinetics, launch angles, spin, and momentum.

However, in spite of the growing interest in the fledgling field of “golf science,” few books thus far have provided a comprehensive introduction of the subject.

In The Science of the Perfect Swing, mechanical engineer Peter Dewhurst offers a full treatment of the science of modern golf. Based on three decades of experience in the physics of golf, Dewhurst examines topics such as the interaction between club face and ball, various aspects of trajectory and impact, and the physics of putting. Rich in illustrations, graphs, and charts, Dewhurst presents physics-based discussions in an accessible format.

Each chapter also contains a substantial “Findings and Consequences” section, which draws conclusions based on the science, and makes recommendations on ball-striking and other facets of the game. From the mechanics of club design to modeling the trajectory of the ball once it leaves the club face, The Science of the Perfect Swing unravels some of the elusive mysteries about what it takes to play a great game of golf.

Interesting and informative, The Science of the Perfect Swing strikes a perfect balance between hard science and an accessible tone that will appeal to golf enthusiasts, engineers, and general readers of sports science.

Peter Dewhurst graduated first in class as a mathematics major at the University of Manchester in the UK, and was elected Sir Charles Reynold Research Fellow to continue research in applied mathematics and engineering mechanics for the Ph.D. Other awards, in his career, have included the Taylor Medal from the International College of Production Research, the President’s award from the Society of Plastics Engineers, the Rhode Island Governor’s award for Technology, and the U.S. National Medal of Technology from President Bush senior. He recently left University teaching and research to devote time to writing and golf equipment design. He is Professor Emeritus in Theoretical and Applied Mechanics, and Industrial Engineering, at the University of Rhode Island, where he was two-time winner of the Carlotti Award for research excellence.

Great athletes hold out the hope of perfection – and the few truly transcendent...