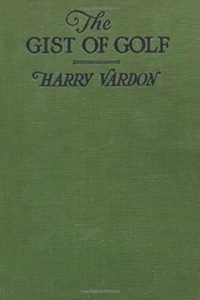 A short and casual set of golf lessons by one of the world’s greatest golfers, Harry Vardon. The beauty of the book is in its personal nature, and Mr. Vardon’s recounting of many real life (and very humorous) stories. He tells of the time that he was chased around a putting green by a vicious white bull; and how a Scottish caddy persuaded him to purchase a niblick after he scored a 9 on a hole.

(“Ye’ll have a niblick this afternoon, or I’ll no’ carry for ye.”) And how another young caddy described a clergyman who often lost his temper on the course. (“Big blue pimples would come out on his face and you’d think he was going to have a fit.”) And then there’s the story about the man who missed the ball completely, yet lost it at the same time…oh well..we shouldn’t give the whole book away…:)

This edition is a faithful reproduction of the original 1922 George H. Doran edition. Every golf lover should have this great classic of Harry Vardon’s.

Harry Vardon, a native of Great Britain, won six British Opens and was generally regarded as the world’s best golfer at the turn of the century. He won the U.S. Open in 1900 and tied for second in 1920 when he was fifty years old.

Kevin Costner and Rene Russo star in this hopelessly romantic story of a out-of-date...