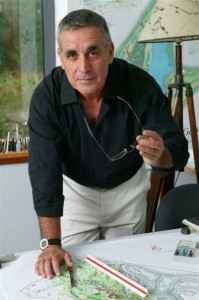 Jorge Santana da Silva was born in 1956 in Setúbal (50 Km south of Lisbon), Portugal. After studding in the field of civil engineering, degrees of geometrician and surveyor engineer, starts in Saudi Arabia for the American construction contractor L. G. Defelice Inc., in 1977. Back in Portugal collaborates with several design, project and construction companies, from 1978 to 1981.

His career in Golf starts at 1981 in the Portuguese Madeira Island. At the time the existing 9 holes Golf Santo da Serra was remodeled into a modern 27 holes by Robert Trent Jones Senior. Jorge is chosen by the contractor to direct the earthmoving works and has been involved full time in Golf course design and construction ever since.

In Madeira meets Robert Trent Jones Senior’s design collaborators and fascinated by the work of sculpting existing land into forms, to make the Golf game possible and interesting, concentrates his interest in this job that requires, not only his engineering knowledge but also the challenge of improving his understanding of the game, learning landscape architecture, irrigation, agronomy, among others. When Cabell B. Robinson, associate designer and director of all Robert Trent Jones Senior‘s architecture and construction companies in Europe for 17 years, decides to start his own Golf course designing company, Jorge does not hesitate when he is proposed to share Cabell’s responsibilities in March 1989.

Back in his home-town, slowly establishing a name for him, starts in 1994 his own practice creating Golf Design Lda., and proves being able to design very interesting, pretty and challenging courses on difficult land. The first project, fully designed by him was Golf Quinta da Deveza, a 18 holes Golf course in Amarante, northern Portugal. This mountain course is inaugurated in 1997. The Portuguese Professional Championship is been played here since in 1998.

Gregory John Norman (born in February 1955) is an Australian professional golfer and entrepreneur,...