The Masters Tournament is one of the two majors that has a permanent home.  The Augusta National Golf Club in Georgia, USA, plays host to the annual golf competition that’s rich in history and tradition. Bob Jones and Clifford Roberts purchased the Fruitlands Nurseries in 1931, and with the help of golf architect “supremo”, Alister Mackenzie, turned the turf into one of the finest and most traditional golf courses in the world. 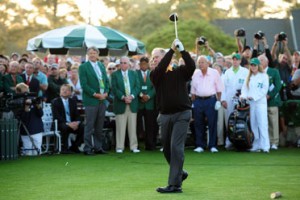 They proceeded to invite all of the top American golfers of the era to an inaugural tournament on March 22, 1934. Six years later the Masters was re-scheduled to the first full week in April.  Since then, the Augusta National has played host to one of the most illustrious events on the international golf calendar. It is golf’s most unique major championship and is possibly most famous for its ceremony for the tournament winner. Each year the victory is awarded a Green Jacket, usually presented by the previous year’s winner

Although dominated by American golfers initially, South African legend Gary Player broke the international duck by grabbing the US Masters title in 1961. Prior to that American giant, Arnold Palmer, had made the course and title his own. On the other occasions, Nick Faldo in 1990 and Tiger Woods in 2002, the club chairman was on hand to check the jacket’s collar was straight.

The prestigious tournament takes place in breathtakingly beautiful surroundings. Famous for its Azalea-draped scenery, the course was built on the former Fruitland Nurseries. It’s heritage is still obvious today with many varieties of shrubs and trees decorating the course. In fact every hole takes the name of a plant, the 13th is called Azalea, while the 3rd is called Flowering Peach. Only one hole is not protected by a bunker, the 14th, and the greens are notoriously fast. …source

Sam Snead, second from left, was the first Masters champion to be awarded the green jacket after winning in 1949, a gesture by the club to make the winner an honorary member. Also pictured, from left, are Lloyd Mangrum, Bobby Jones and Johnny Bulla.

The current Masters champion is the only person allowed to take the green jacket off club property, and 2003 winner Mike Weir made sure his grandfather had a chance to try it on. “We had some pictures made before he passed away,” Weir said. “That was pretty cool.”

Gary Player won his first Masters in 1961, left, and received his green jacket from the 1960 champion, Arnold Palmer. The tables were turned in 1962, when Palmer won and Player presented. That year, Player went home to South Africa with his jacket, the only one that was never returned. “I assumed it was mine,” Player said. “I got a call from Clifford Roberts and he said, ‘Gary, I believe you’ve taken the Masters jacket home. You’re not supposed to do that.’ And I said, ‘Mr. Roberts, if you want it, you better come and fetch it.’ He appreciated the humor and told me I must never wear it around. It’s in a plastic bag in my closet.”

Jack Nicklaus with Bernhard Langer after the 1986 Masters. Nicklaus won at Augusta six times, but he didn’t have his own green jacket until 1998. The club usually finds a jacket that will fit the champion for the ceremony, then makes him one of his own. But something fell through the cracks, and each year Nicklaus wound up borrowing a green jacket for the Champions Dinner.

Tiger Woods with Nick Faldo in 1997. Woods was given a 44 long, which felt big enough to be a blanket. “I remember the guys who have won, they’ve always said the jacket shrinks over the years,” Woods said. “I don’t know if it actually shrinks. Guys just might fill out a little bit more. So, yeah, my jacket is a just a touch big.”

Trevor Immelman, who won in 2008, was playing that year in Asia when he landed in Japan. He carried the green jacket in a suit bag, but it wasn’t long before some golf fans recognized him and realized what was in the bag. He said they began to cry.

2009 winner Angel Cabrera said during the green jacket ceremony: “This is a great moment, the dream of any golfer to win the Masters, I’m so emotional I can barely talk!”