Par 3 course waiting for a hole in one. 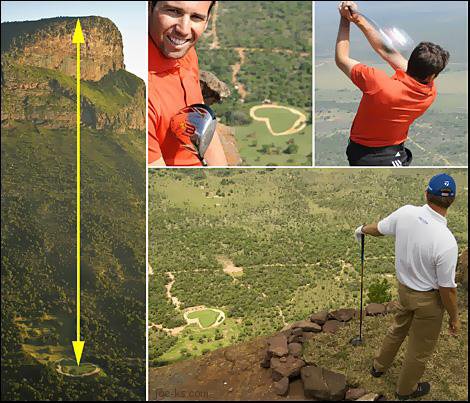 This tee-off point on top of a 1,410 ft. mountain in South Africa is the hardest golf shot in the world, and more than $1 million awaits the player who can score a hole in one. Players must take a helicopter to the top to play the longest and highest par three on the planet. Taking the shot also requires courage. A player needs to teeter terrifyingly close to the edge of the mammoth hillside.

The ‘Extreme 19th’ hole is so high, the ball takes almost 30 seconds to reach the ground. Channel Nine cricket commentator Mark Nicholas recently joined an elite list to have the shot in just three swings. “It was awesome, riveting and phenomenal,” he said. “It’s like the end of the world when you get up there, and it’s an awful lot of fun. It’s such an adrenaline rush taking the helicopter up and then rushing back down.”

This par 3 hole measures 830 metres from tee to green and is played from a vertical height of 430 metres. It’s based at the Legends Golf and Safari Resort, within the Entabeni Safari Conservancy in South Africa ‘s North-eastern Limpopo Province.
A round of golf – including a buggy and lunch – will set you back R450 ($70). The ‘Extreme 19th’ costs $1060 per four ball, including helicopter ride, souvenir cap, glove, and a DVD of you playing the hole. So far, no one has even come close to pocketing the million-dollar prize, …source

See a spectacular video about the Extreme 19th hole!

Naruo Golf Club is located in the hills between Kobe and Osaka. Naruo is... 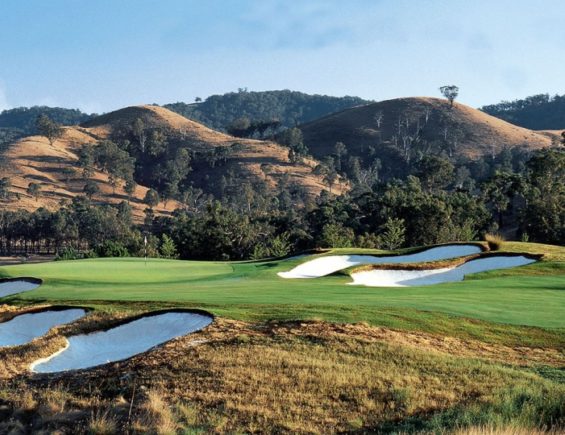 One of the world’s most private courses in spectacular rolling countryside in rural New...